The Pinewood Derby is a long-standing Boy Scouts tradition that is still popular to this day. The Derby is now a regular event, designed to encourage sons, fathers and other family members to build their own car together as both a bonding activity and for the chance to win one of the awesome Pinewood Derby medals that are handed out each year. Read on to learn more about the history of the Pinewood Derby, fun facts about the race, and why these races are still a big part of joining the Boy Scouts.

Rev Up Your Wheels: The Beginning of the Pinewood Derby

The first Pinewood Derby was held at the Scout House in Manhattan Beach, California in 1953. Cubmaster Don Murphy came up with the idea of racing miniature pinewood derby cars down a track after learning that his son was too young to participate in the still-popular Soap Box Derby. At the time, Murphy worked for the Management Club at North American Aviation, which sponsored the first derby race and agreed to supply the Pinewood Derby medals for the winning team.

The rules for the Pinewood Derby are very much the same as that first race. Each Boy Scout is given a block of wood made of pine, four plastic wheels, and four nails. The completed car must use all nine pieces and not be longer than seven inches. The car must fit the track used for the race and Scouts can modify their pinewood blocks in a number of ways, like whittling the blocks with a knife or carving tool.

After the initial race in 1953, news of the event spread quickly. Soon, scouts across the U.S. were participating in races held by local Cub Scout and Boy Scout troops, and a new American tradition was born. The Pinewood Derby became an official part of the Boy Scouts of America program in 1955. The Boy Scouts in an ever-evolving organization that has changed with each decade, but the Pinewood Derby is one of its mainstays. Pinewood Derby medals are typically handed out to the first, second, and third-place winners of each race.

Like that first race, the Derby is seen as an activity that young scouts and their parents, other family members or a mentor can do together. In making a car for the Pinewood Derby race, scouts learn about speed, aerodynamics, physics, design, and function. Parents who do too much of the work in making the car are frowned upon, as the hands-on activity is intended to teach scouts how to build their own derby car by themselves, with a little help from an adult.

The Need For Speed: Pinewood Derby Cars Get More Stylish and Sophisticated

When Don Murphy first envisioned a Pinewood Derby race, he probably didn’t think it would take off in such a big way. Some of the best-made derby cars are legendary, and definitely deserving of one of those Pinewood Derby medals. The creativity behind some of the best-designed cars is stunning, reminding us just how imaginative kids can be.

Since the beginning of the Pinewood Derby, the style and design of each car is a big part of the fun. Many Pinewood Derby events now have a separate design competition, where the scouts with the most clever, unique and awesome-looking car can also win a medal. It’s amazing to see how detailed some of the best Pinewood Derby cars are, like cars built to look like monster trucks, superhero vehicles, classic cars, old-fashioned wagons, race cars, spaceships, cartoon characters and more. When it comes to painting and building a Pinewood Derby boxcar, the sky is truly the limit!

A Race Where All Kids Win, Even If They Don’t Get First Place 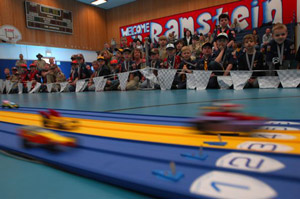 The Pinewood Derby isn’t just about making a cool car that zooms down the track as fast as possible. Cub Scouts and Boy Scouts also learn valuable lessons when participating in the Pinewood Derby. For young boys, the event is a chance to learn about teamwork and practice being a good sport-even if they don’t win. Taking part in the Pinewood Derby is a great way for scouts to gain confidence. In making a race car themselves, kids may discover that they love building things or have a talent for painting and art.

Regardless of whether or not a scout wins a Pinewood Derby medal, participating in the competition creates long-lasting memories for kids, parents, and families alike. For Cub Scouts and Boy Scouts who are now adults, racing their car in the Pinewood Derby is often one of the fondest memories of their childhood. For parents and mentors helping young scouts build their first Pinewood Derby car, the competition is a chance to be a kid again.

As an event that has been around for 60-plus years, it’s clear that the Pinewood Derby is as popular as ever. Trophy Outlet has all the medals and trophies Boy Scout troops need to make their own Pinewood Derby a memorable and exciting event. Shop Trophy Outlet for customized medals, trophies and more!