When a team or an individual receives an iconic trophy, they’ve achieved something highly noteworthy through hard work, skill, and determination. This is never more evident than in professional sports, where some of the best athletes go head to head.. This spirit of competition has helped make several professional sporting trophies truly iconic. These are 10 famous trophies and the stories behind them.

As they glide across the ice as gracefully as professional skaters, pro hockey players are in pursuit of the Stanley cup, one of the most famous honors in sporting within the U.S. and Canada. Made from silver molded to form a bowl on top of a silver pedestal, the Stanley Cup is one of the most identifiable  trophies of professional sports that the U.S. and its polite neighbor have to offer hockey teams.

First presented in 1893 to the Montreal Amateur Athletic Association on behalf of the affiliated Montreal Hockey Club, the champions of the Amateur Hockey Association of Canada (AHAC) , the trophy has commemorated NHL championship winners. Considering the fierce competition in the NHL playoffs, the award is always won by the team that demonstrates the play required to deserve it.

Also known as the “Claret Jug”, the Gold Champion Trophy is awarded to the winner of the British Open, one of the most competitive events for golfers on both sides of the Atlantic. First awarded in 1872 as the highest level of sports success in professional golf, this eye-catching trophy made from silver forms a decorative jug that sits on a low pedestal. The Claret Jug is a prized possession for any winning pro golfer.

Golf is often referred to as a game of poise and skill. The same characteristics apply to the creation of the Golf Champion Trophy, which is intricately engraved with its winners’ names. Though it isn’t originally an American sport, winning the Golf Champion Trophy is something every American golfer dreams of. With its classic design, this award commemorates timeless success in pro golf. 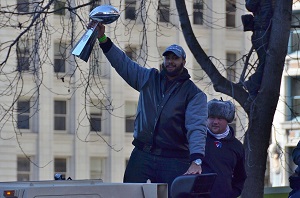 If you spend Sunday afternoons or Monday nights watching professional football games in the NFL, you probably already know about the Vince Lombardi Trophy. If you’re old enough, you might even remember its namesake: Vince Lombardi, an American football player and coach best known as the head coach of the Green Bay Packers in the 1960s. Featuring a football atop a pedestal, this award cast in silver reflects camera flashes like a mirror.

The trophy was first awarded on January 15, 1967, to the NFL champion team, the Green Bay Packers. Since then, it has graced the trophy collections of NFL teams from coast to coast. Unlike some professional sports trophies, which are won but not permanently possessed, a new Vince Lombardi Trophy is created every year to award to the most successful team, allowing teams to collect trophies that serve as a tangible reminder of their success.

Professional tennis players don’t get enough credit for being great athletes, but when they win the Wimbledon Trophy, they have the sporting world’s attention. Called “the oldest and most prestigious professional tennis tournament of the world” by Sporting99, this trophy is actually two pieces combined into one: a shiny, gold metal  trophy cup that features exquisite detail, and a round, detailed, silver tray in which the cup sits.

Held at the All England Club in Wimbledon, a suburb of London, the trophy’s history goes back to 1877 when it was created by the All England Lawn Tennis and The Croquet Club as an award to help raise money for a new tennis court roller. Today, the iconic trophy is awarded in the following Wimbledon divisions: Gentelman’s Singles, Ladies’ Singles, Gentleman’s Doubles, Ladies’ Doubles, and Mixed Doubles.

Regular season professional basketball games can be hard to find on TV if you live in a city that doesn’t have an NBA team, but when teams enter the NBA Finals, the event has primetime coverage because the Larry O’Brien NBA Championship Trophy is on the line. Made from polished gold, the trophy shows a basketball that’s only centimeters away from sliding through a basketball rim and net.

Originally named the Walter A. Brown Trophy, the trophy was renamed in 1984. Since then, it’s commemorated the success of pro basketball teams that are just as iconic as the trophy itself, such as the 1980’s Boston Celtics and the 1990’s Chicago Bulls. One of the most memorable moments of this trophy’s history involves shooting guard Michael Jordan cradling it as he shed tears of joy for his team’s greatest success. 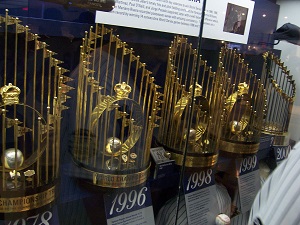 “America’s greatest pastime” involves a trophy of great significance. Enter the Commissioner’s Trophy, which is awarded by the MLB commissioner to the winner of the U.S. World Series each year. The Commissioner’s Trophy contains flags representing each team in North America’s top two national leagues, The National League and the American League. Made from gold and silver metal, the award stands out on any trophy shelf.

The Commissioner’s Trophy was first awarded in 1967 to the St. Louis Cardinals, who trounced the Boston Red Socks which allegedly perpetuated the “curse” that placed on the Sox when they traded Babe Ruth for a comparably poor return. The most recent Commissioner’s Trophy was designed by Tiffany & Co. to replace the original Lawrence Voegale design. The trophy is one of the most iconic awards in professional sports.

Thousands of car racing events are held in the U.S. every year, but none of them are quite as competitive and renowned as the Indianapolis 500. the winner of which receives a miniature version of the original Borg-Warner Trophy. A tall, distinguished trophy cup made with gold and silver and featuring a lid topped by a small figure holding an auto racing flag, the original award is permanently kept at the Indianapolis Motor Speedway Hall of Fame Museum.

First awarded in 1936, the trophy takes it name from the automotive supplier that originally commissioned it: Borg-Warner Automotive Company, also known as “BorgWarner”. The design of the replica Borg-Warner Trophy has changed over the years, but, unlike some sporting trophies in this list, the award has held onto its original namesake. If you win the Borg-Warner Trophy, you’re sure to be recognized as one of the best race car drivers on the planet.

Yachts are often viewed as pleasure vehicles that are best used for slow, leisurely cruise. However, competitive yacht racing takes prominence in the sport’s top event, the America’s Cup, also known as the “auld mug” competition. A classically detailed jug made from silver, the America’s Cup trophy is an award that stands out on any trophy shelf.

The trophy’s history goes back to 1848 when Garrard & Co. produced several high-end, off-the-shelf trophies. Henry William Paget, 1st Marquess of Anglesey purchased one and gave it to the Royal Yacht Squadron for its 1851 Annual Regatta, where yachts raced around the Isle of Wight. Originally known as "R.Y.S. £100 Cup", the award was renamed in 1851 in recognition of the winning yacht, a U.S. vessel aptly named “America.” 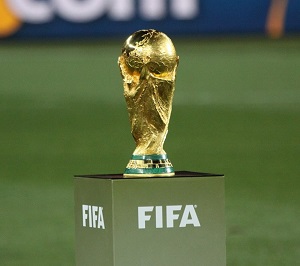 In the U.S., we refer to the sport as “soccer”, but what we call soccer is known as “football” all over the world, which explains why the FIFA World Cup trophy is awarded to winners of the “FIFA World Cup association football tournament”. An event that features national soccer teams from around the globe, the tournament is one of the most competitive in professional sports, bar none. The winning team celebrates both personal accomplishment and national glory.

Featuring a prominent, golden globe cast in the likeness of Earth that sits on an organically designed golden pedestal, the award is accented by two polished malachite rings that adorn the base. First awarded in 1930 to Uruguay’s national soccer team, the trophy was originally known as “Victory”, then as the “Jules Rimet Trophy”, before receiving its current name in 1974. Whatever you call it, the award is one of the world’s most iconic sporting trophies.

Unlike the other, traditionally designed trophies in this list, the WWE Championship Belt is a trophy that comes in the form of a wide belt the winner wears around his waist to show achievement. Some people view WWE wrestling as more of a soap opera than a sport, but there’s nothing disingenuous about the championship belt, which is designed with precious metals and stones and frequently customized to exude the winner’s bravado and prestige.

The WWE Championship Belt first appeared in 1963 when it was awarded to heavyweight wrestler Buddy Rogers. Over the years, the award has been claimed by some of the most recognizable names in the sport, including Hulk Hogan, Brock Lesnar, and Stone Cold Steve Austin. The championship belt isn’t something you would wear to complement an outfit, as many winners display it as a wall hanging or in a nice trophy case.

There are plenty of reasons for pro athletes to be successful at the sport they love most. Success can bring salary increases and bonuses, lucrative endorsement deals, international acclaim, and the opportunity to hold the trophy that awards the highest level of competition in their sport. Long after pro athletes retire, and the money stops rolling in like it did when they played, their trophies remain, offering a constant reminder that their feats were worth the effort.

But professional athletes aren’t the only players who deserve trophies for sports success. Amateur athletes, who can be just as motivated as professionals to play the game, merit sporting trophies, too. Wherever a high level of competition exists in a sport that people love to play and cheer for, a great trophy award should be the light at the end of the tunnel.


If you need sporting trophies to award to winners of your competitions, shopping at Trophy Outlet is a great option. We offer a wide selection of trophies in different styles you can customize to make them look truly unique. For information about our products, please call us today at (866) 282-0847, or  use the contact form on our secure website. We look forward to helping you commemorate the success of your athletes at games they play with passion.